Integration of Large Transgenes into the Genome of Hematopoietic Primary Cells

RNA-guided CRISPR-Cas9 nuclease is a genome-editing tool that allows researchers to edit parts of the genome by removing, adding, or altering sections of the DNA sequence. CRISPR-Cas9 targets double-stranded DNA using single guided RNA (sgRNA) that shepherds the nuclease to the target DNA sequence. Once at the target, CRISPR-Cas9 creates a double-stranded DNA break. Consequently, the hosts own DNA repair mechanisms, such as non-homologous end-joining (NHEJ) or homology-directed repair (HDR), repairs the break. To alter or correct a dysfunctional gene CRISPR-Cas9 nuclease and sgRNA targets a new homologous DNA template (transgene) to the break site where the new transgene integrates into the genome predominately using HDR.

Adeno-associated viral (AAV) vectors are a delivery vehicle for the sgRNA, CRISPR-Cas9 nuclease, and homologous DNA template to the nucleus of the host cell for genome modification by HDR. However, one limitation of AAV vectors is the packaging capacity, approximately 4.5kb. This packaging limitation creates an obstacle for the treatment of genetic diseases requiring large transgenes such as Duchenne muscular dystrophy, hemophilia, and cystic fibrosis, which can be over 7kb.

In a paper published in Cell Reports, Bak and Porteus present a CRISPR-Cas9 methodology that enables site-specific integration of large transgenes split between two AAV vectors, where one AAV vector delivers half of the transgene while the second AAV vector delivers the second half. Simultaneous addition of the two vectors, containing halves of the CCR5 gene, along with CRISPR-Cas9 nuclease and sgRNA, successfully underwent sequential targeted integration of the CCR5 gene. The authors show that the new methodology is efficient in introducing large transgenes into human cancer cell lines and primary blood cells, such as peripheral blood CD3+ T cells and cord blood CD34+ stem and progenitor cells (HSPC). The simultaneous addition of the vectors and the sequential targeted integration of the new gene are of particular importance to the manipulation of HSPCs due to their inability to tolerate repeated genetic manipulations. Additionally, 16 weeks after transplantation of HSPCs modified with the CCR5 gene into irradiated NSG mice showed engraftment of human cells in the bone marrow. Taken together, the authors demonstrate a successful CRISPR-Cas9 methodology of integrating large transgenes into human cells, which can be applied to therapeutic genome editing for combating inherited diseases.

StemExpress provides fresh blood products and primary cells at a speed that rivals our competitors. Save time and resources in your next experiment by ordering fresh peripheral blood CD3+ T cells and cord blood CD34+ stem cells from StemExpress. Take a look at our online catalog to see what other products we offer. 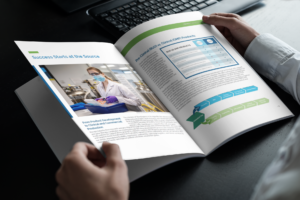 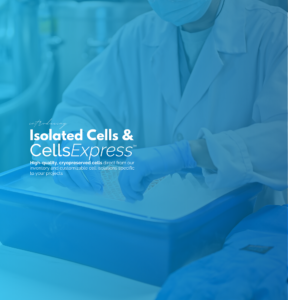